“We have no more right to decline the exercise of jurisdiction which is given, than to usurp that which is not given. The one or the other would be treason to the constitution.”

The concept of jurisdiction encompasses the principles of state sovereignty and non-interference. The territorial sovereignty of a State and the rights it has been bestowed by the international law principles and various conventions are fundamental to its functioning. And when it comes to the territorial claim to the international waters, there have been centuries of disputes. Earlier, the cardinal rule held that the control of the sea would be with the militarily stronger country. Finally, the ‘freedom of seas’ doctrine took effect in the form of the United Nations Convention to the Law of Sea (UNCLOS) setting the three-mile limit rule. But the recent award given by the Permanent Court of Arbitration in the EnricaLexie case raises crucial questions in relation to the rights a State has over its territorial seas.

On 15th February 2012, an Italian oil tanker – MV EnricaLexie[2], chartered in the contiguous zone of India. Two Italian Marines on-board shot at two Indian fishermen who were boarded on an Indian trawler – St. Antony. Apparently, the fishermen were mistaken for pirates. The Marines were arrested and subsequently taken in custody by the Kerala police.

The two main issues[3] urged by the Italian Government were related to the criminal jurisdiction asserted by India (which violated Italy’s exclusive authority over the Marines), and the question of sovereign immunity.

It is pertinent to note here that the said incident took place at approximately 20.5 nautical miles off the coast of India. The territorial claim[4] a country has over the seawater extends up till 12 nautical miles from the coastline and it has prescriptive jurisdiction in this area. In addition to it, waters adjacent to the territorial sea, not exceeding 200 nautical miles, forms the Exclusive Economic Zone (EEZ) and here, the State only has jurisdiction over the violation of its customs and sanitary laws. High seas are the areas which do not form part of the territorial sea or EEZ. They are open to all States for the enjoyment of freedoms laid down in Article 87[5]of the Convention.

Italian Government claimed that because the said incident took place beyond the territorial sea, India violated Article 27(5) of UNCLOS. It was also claimed that India infringed Italy’s exclusive rights over the Marines guaranteed as per Article 97 of the Convention.[6]India refuted this argument and based its jurisdictional claims on the domestic legislation, as two of its citizens were killed on an Indian fishing vessel in the EEZ, which is in essence its territory.

State immunity is the principle of international law that exempts a state from prosecution of suit for the violation of domestic laws of another state. It is closely related to the doctrines of non-justiciability and act of state.

Lord Browne-Wilkinson stated in Ex parte Pinochet (No. 3) [7]that,

“It is a basic principle of international law that one sovereign state does not adjudicate on the conduct of a foreign state. The foreign state is entitled to procedural immunity from the processes of the forum state. This immunity extends to both criminal and civil liability.”

The growth in piracy off the coast of Somalia garnered a significant international response. In 2011, the International Maritime Organization[8] promoted the use of Vessel Protection Detachments (VPDs) as a preferred means for direct protection from piracy. In consonance with it, the Government of Italy enacted Law No. 130/2011, which provided for the deployment of VPDs. This was consistent with the United Nations Security Council’s anti-piracy resolutions. Italy contended that the Marines from the Italian Navy were to ensure the security of Italian vessels travelling in the International Waters. Therefore, they were acting in an official capacity and by the virtue of the same, they had sovereign immunity as per the Customary International Law.

While India purported the view that sovereign immunity is only referred in case of non-commercial purpose. The engagement between the Italian government and ship-owners arose from purely commercial interests, so the rule of sovereign immunity could not be invoked as the Marines acted in a commercial capacity.

It was contended on behalf of the Italian Government that the State of Kerala violated the ‘Principles of International Comity and Sovereign Equality Amongst States’[9] by arresting and detaining the Italian Marines. The issue was brought to the Supreme Court of India in 2013, and the Court ruled in the Republic of Italy v. Union of India[10] that as per the Indian government notification issued in pursuant to the Convention, India has jurisdiction over the EEZ, and thus the case can be tried in India. Also, since Article 97 lays down the rules for high seas and the incident took place in the contiguous zone, so India had jurisdiction. The Supreme Court of India failed to consider the question of sovereign immunity.

In 2015, Italy submitted the dispute under Annexure-VII (Arbitration) read with Article 287 (Choice of Procedure) pursuant to UNCLOS. International Tribunal for the Law of Sea (ITLOS) passed a provisional order, directing the parties to maintain a status quo and suspend all proceedings. Thereafter, the matter came before the Permanent Court of Arbitration at The Hague.

SUBMISSIONS OF ITALY AND INDIA AT THE HAGUE

The Government of Italy urged that by coercively exercising jurisdiction over the Marines, the Indian government has violated Articles 56 (2) & 58 (2) of the Convention[11], which secure the rights of States in the EEZs. This consequently infringed Italy’s exclusive rights under Article 97. In addition to this, by capturing EnricaLexie India violated Article 87 of the Convention, which safeguards freedom in the high seas. India also failed to cooperate with Italy’s initiatives in the pursuit of repression of piracy.

The Government of India asserted that because of the killing of its citizens, Italy has violated Article 56 of the Convention. The rights of navigation and freedom were also violated by Italy as per Article 87 and Article 90 of UNCLOS. India sought that Italy should make full reparation of the breaches.

THE AWARD: A BALANCE OF A SEEMING WIN-WIN

The Permanent Court of Arbitration decided that both Italy and India had concurrent jurisdictions in the case, but India couldn’t exercise criminal jurisdiction because the Marines were protected by immunity. It was held that Italy has interfered with the rights of the fishermen on the Indian vessel and thereby, violated[12] Articles 87 & 90 of the Convention. Consequently, India is entitled to compensation for the loss of life and damage to property.

It was found by the Court at Hague that India had not violated Article 87 of the Convention[13], which was contended in relation to the subsequent activities of arrest by the Indian Authorities. Also, it was decided that India has not violated Article 100 of the Convention concerned with the duty of a state to cooperate with the repression of piracy.

ANALYSIS OF THE AWARD BY THE PERMANENT COURT OF ARBITRATION

The Permanent Court of Arbitration came to the conclusion that Articles 56 & 58 of the Convention do not apply to the present case. Article 56 lays the rights and duties of the Coastal State in the EEZ, whereas Article 58 states the rights of other States in the EEZ of the concerned state. By rendering it impertinent, the rights of India are imperilled. These provisions provided India the right to extend jurisdiction to the events unfolding in the EEZ. It had fundamental relevance to the case as the incident occurred within the contiguous zone. This essentially puts in jeopardy the rights of the citizens of India to practice their fishing profession within the patrimonial sea, as the question of their protection in the zone remains unanswered. The fishermen travel across this zone for their basic livelihood and considering the risk that was brought to light through this case, their safety in the EEZ needed to be deliberated upon.

A substantial consideration and deliberation on these questions could have cleared the air regarding these controversial questions. The factual matrix of the case and the legal intricacies it touched demanded an in-depth analysis and clarifications on the many complicated issues. The court could have constructed principles to ensure the safety of private vessels, the government officials on-board and the poor fishermen in the sea.

This 8-year long dispute strained the diplomatic relations of India not just with Italy, but the European Union as well.The decision has satisfied both the countries to the extent that they can mend their diplomatic relations. India has acknowledged the decision and seeks to adhere to it. But it should ensure that Italy is in the same pursuit.India should negotiate an adequate compensation package to ensure equity for the two fishermen. Though in March 2015, Italy announced that it would end the practice of employing VPDs on-board the vessels, but steps should be taken in respect of increasing the security of fishermen from risks existing in the contiguous zone.

[Since the decision is met with consistent dissent, the detailed record of the Award explaining the reasons for dissent is awaited and can throw more light upon it.]

*Mili Budhiraja is a second year student at Faculty of Law, University of Delhi, New Delhi.

[1]John Marshall was an American politician and lawyer who served as the longest-serving chief justice and fourth-longest serving justice in Supreme Court history of United States. 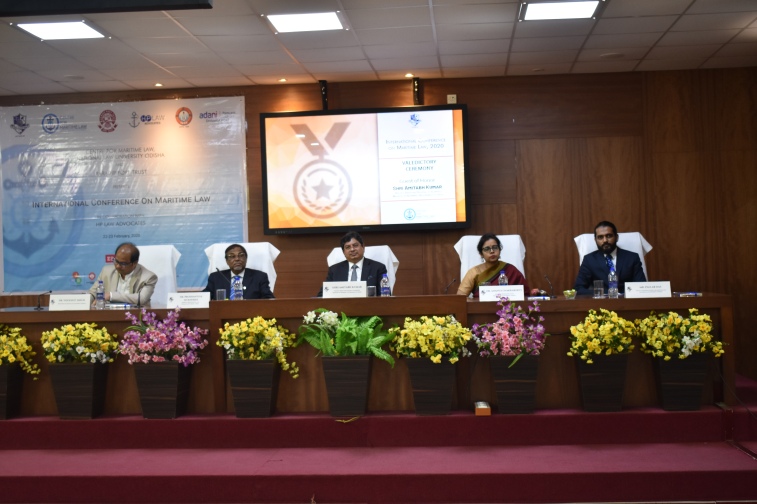