On August 5, 2020, a three-judge bench of the Supreme Court clarified the interpretation of the Major Port Trusts Act, 1963[1] (“MPTA”) in Cochin Port Trust v. Arebee Star Maritime Agencies Pvt. Ltd.[2]Four former decisions of the Court had contradictorily interpreted the provisions related to liability for payment of charges related to unclaimed cargo, based on various considerations. The Court was tasked with settling the construction of the statute as well as the four judgments.

Fundamentally, the underlying facts are as follows: The consignor recruits the shipowner / the steamer agent to deliver the goods to the consignee. The steamer agent brings goods into the port and hands them over to the port trust. These goods are intended to be received by the consignee, within a certain period.During this entire transaction, the consignor draws and hands over to the steamer agent, the bill of lading, which is an acknowledgement of receipt of the goods and an undertaking to deliver them to the consignee. The bill of lading also acts as a symbolic representation of the goods, and its endorsement and delivery amounts to transfer of the goods. The moot issue in the reference was: who is liable for various charges payable to the port trust?

In Port of Madras v. K. P. V. Sheik Mohamed Rowther[3] (Rowther-I), a Constitutional Bench while deciding liability for charges incurred for landing goods had held that the port trust is in a position of the bailee while the steamer agent is the bailor. Thereafter, four Division Benches of the Court opined differently to the issue, based on – the definition of “owner” under the MPTA; the nature of bailment relationship as it arises in the transaction; distinguish ability and precedential value of Rowther-I; and the effect of endorsing the bill of lading:

A Division Bench of the Court in Cochin Port Trust v. Arebee Star Maritime Agencies Pvt. Ltd.[8] observed these inconsistencies and requested the Chief Justice to refer these questions to a higher bench:

The definition of “owner”

Section 2(o) of the MPTA defines “owner”for two different purposes,in relation to goods and relation to a ship.Steamer Agents argued that charges for services rendered to goods could only be recovered from an “owner” of goods. In relation to goods, the definition “includes any consignor, consignee, shipper or agent for the sale, custody, loading or unloading of such goods”.Applying noscitur a socii, they contended that a steamer agent cannot be included in the definition.The Supreme Court rejected this argument,as noscitur a socii cannot be applied[9] when the legislature has sought to widen the provision’s scope.As was succinctly put in Bharat Cooperative Bank (Mumbai) Ltd. v. Cooperative Bank Employees Union,[10]that whenever the word ‘includes’ is used, “the legislature does not intent to restrict the definition”.

In Sriyanesh, the Court had read Section 2(o) conjointly with the concept of a bill of lading, concluding inter alia that the steamer agent never became the owner of the goods under the bill of lading, and therefore, the consignee was liable for charges in respect of the goods.The Steamer Agents relied on this reading, but the Court opined that this finding Sriyanesh was factual and did not constitute“an exhaustive code”.The Court’s reading settles the question of the definition of “owner” impacting similar situations. Relevant or not relevant, being an inclusive definition, it would not be possible to escape liability by restricting it.

The legislative scheme – liability for charges

Thereafter, the Court perused the relevant provisions of the MPTA and concluded that the legislative scheme was clear: Until the goods are handed over to the port trust, the steamer agent will be liable for charges. However, after handover and storage of goods, “it is only the owner of the goods or other persons entitled to the goods (who may be beneficially entitled as well) that the Port Trust has to look to for payment of storage or demurrage charges”. This can be concluded from:

Firstly, Section 42(2) and (7) of the MPTA, under which a steamer agent can request the port trust to take charge of goods in its custody and receive a receipt for the same. Once this receipt is handed over to the steamer agent, the latter clause exempts it from any liability for “any loss or damage”.

Thirdly, provisions such as Sections 48, 49A, 49B, 50, 50A, and 50B that elucidate services that can be provided by the port trusts and the mode of imposing charges for the same, distinguish between services provided vis-à-vis vessels and unloading of goods, and those specifically provided to goods in its custody. Therefore, for the former, only the steamer agent would be liable.

Lastly, Sections 60 and 61 enables the port trust to exercise a lien over goods in its custody, “at the risk and expense of the owners of the goods” until discharge of lien, and rent for storage is payable by “the party entitled to such goods”. Further, Section 62 allows the sale of such goods, if they are not cleared by “the owner or other person entitled thereto”. The Court opined that these terms could not include the steamer agent at this juncture. Therefore, under these provisions, the liability for charges relied solely on the consignee.

The nature of bailment

The Port Trust argued that when it becomes the bailee, goods are handed over to it by the steamer agent, who, in turn, becomes the bailor. Alternatively,the Steamer Agent’s argued that they never own goods themselves – When the consignor hands over goods to them, a bailment relationship comes into existence.Thereafter, when they hand over goods to the port trust, the latter is a sub-bailee to the original bailor, i.e. the consignor.

The Court held in favour of the Port Trust for inter alia two reasons: Firstly, under Section 148 ofthe Contract Act, a person delivering the goods is bailor, who may or may not be the owner.As the steamer agent delivers goods, it becomes the bailor. Secondly, in Rowther-I the Court had noted this relationship and clarifyingly held that the port trust“does not get the goods from the consignee. It cannot be the bailee of the consignee. It can be the agent of the consignee only if so appointed, which is not alleged to be the case, and even if the Board be an agent, then its liability would be as an agent and not as a bailee”. Thus, the decision in Sriyanesh had been incorrectly decided to the extent in contradicted the higher bench in Rowther-I.

However, the Court thought the question of sub-bailment beyond its reference and kept it open. As noted earlier, the MPTA confers responsibility for post-handover charges on “the owner or other person entitled thereto”, and confers a bailee’s responsibility on the port trust.

The effect of endorsing the bill of lading

Based on its analysis, the Court answered the referred questions as follows:

The three-judge bench limited its interpretation to the MPTA’s provisions enabling liability for a charge. This differed in approach to the earlier Division Benches that heavily relied on the nature of bailment relationship, the effect of endorsing the bill of lading, and definition of “owner”. After settling statutory construction, the Court moved to analyse differences between the earlier opinions and resolved them to maintain MPTA’s supremacy and work ability. Apart from the question of sub-bailment that the Court kept open for future matters, it has commendably settled law that had been uncertain for about two decades. 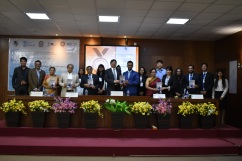